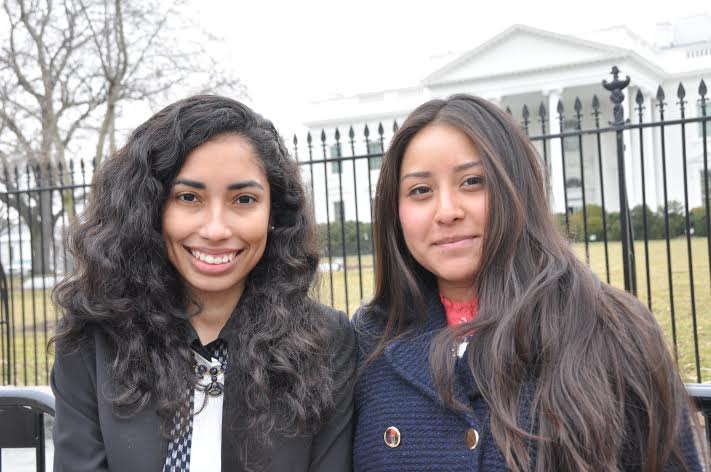 Antonella Membreno is the classic college student. She Snapchats her friends funny photos, studies for classes at Bluefield College and works at her part-time job as a hostess. But, despite seeming like a typical American teenager, Antonella has overcome obstacles just to live a normal life.

When Antonella was 9-years-old she moved to the United States from Nicaragua to reunite with her father who arrived several years earlier.

“I was in 4th grade and didn’t speak English,” Membreno remembers. “It was hard, but you learn.”

Despite getting a late start, Antonella quickly rose to the top of her class, graduating from high school with honors. But when she started looking at colleges, problems arose.

Because Antonella came to the United States when she was 9, she is considered an undocumented immigrant, waiting in a hypothetical line for citizenship. After 10 years, it’s apparent the line isn’t moving.

“We hear all the time about how people should just get in line, “says LUCHA director Greg Smith. “The truth is there is no line.”

Because of her undocumented status, Antonella was unable to participate in important rites of passage like learning to drive or getting a part-time job. Even seeing a movie with her friends could turn her into a criminal since she was unable to receive a license.

“I was raised here. I’ve lived over half my life here,” Membreno says. “It’s weird how you can love a place so much but not fully belong.”

Under the Deferred Action for Childhood Arrivals act, which helps immigrant minors receive several legal benefits, Antonella’s life took a positive turn. She was able to get a social security number and driver’s license, work legally and apply to colleges. But paying for university posed new problems.

It was especially difficult for Antonella’s younger brother, who started doing poorly in school after seeing his sister struggle.

“He decided to slack off because he thought, what’s the point? Even if I do well in school I’ll never make it anywhere,” Membreno explains. “This happens to a lot of immigrant kids. We feel like we have no future. After I got DACA, my brother is trying harder.  He’s enrolled in college.”

In early March, LUCHA Ministries was invited to the Eisenhower Executive office of the White House as part of an Advocacy in Action summit with the Cooperative Baptist Fellowship.

Antonella and her friend Yerendi Roblero, a former Student.Go intern who came to the U.S. from Guatemala when she was just six months old, were invited to attend. While in Washington, they met with their Senate and congressional representatives and attended a meeting with special assistant to the president, Melissa Rogers. For Membreno the experience was formative. She and Yerendi were able to share their stories with Senate and congressional aides.

“I was glad we could tell the senators thank you about DACA,” Membreno says. “It was more challenging talking to the congressmen, but it was nice to let people know that there are still people fighting for [immigration reform].”

The girls learned about advocacy issues affecting people in poverty including hunger and predatory lending. Antonella especially enjoyed visiting Bread for the World, a nonprofit dedicated to issues of hunger.

“My favorite part was hearing Melissa Rogers speak on how churches and the federal government can work together,” she says.

Membreno  acknowledges the need for comprehensive reform. She is studying criminal justice and journalism and wants to eventually go to law school.

“Everyone, whether you know it or not, knows an immigrant,” she says. “I want to help them receive their rights.”

Antonella says she understands why not every citizen participates in advocacy. However she encourages citizens to stand up for those who are not being heard.

“You don’t have to advocate for immigration reform,” Membreno says. “But I think if someone is conscious, if you have the power, you should advocate for things that are meaningful.”