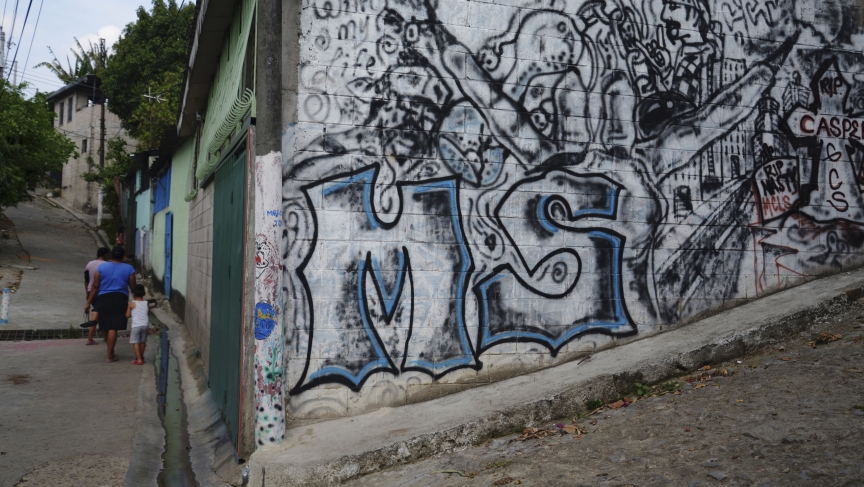 Marcos* was a Salvadoran immigrant in his late 20s whose story caused me to dig deeper in order to understand his home country.  Since then, I’ve studied the history of El Salvador and last year, I visited there.  I’ve made Salvadoran friends both in the US and in El Salvador.  It’s fairly easy for non-immigrant Americans to look at immigrants who struggle in our country and wonder — often aloud — why they are here.  But perhaps if more people had the opportunity to visit their countries of origin, they would understand a little better.

I met Marcos in the homeless shelter following his 2-week stay in the local hospital.  He was traveling from Texas to New York and became seriously ill.  His “friends” called 911 and dropped him at a rest stop along I-95.  He was totally alone, with nowhere to go, and he didn’t know anyone in Virginia.

Marcos was 14 when he came to the US, fleeing increasing threats to his family if he didn’t join a local gang.  “They threw rocks on our tin roof every night, and no one could sleep.  And they threatened my family.  The gang leader said they would rape and kill my mother, and kidnap my sister if I didn’t join. So I left to keep them safe.”

He was alone in a large city, surviving on the streets, and was soon involved in drugs.  And now, 15 years later, Marcos has AIDs. I asked him if he would have emigrated had known how life in the US would turn out.  “Yeah, I would have still come.  I’d rather live with AIDs than face what I was facing in El Salvador.”

Approximately 1 of every 5 Salvadorans lives in the United States, making Salvadorans the 6th largest immigrant group in the US.  A large number came as a result of the civil war, which ended in 1992; others came as a result of natural disasters that affected the country; and relatives have joined immigrants through family reunification.  Today, much of the influx is due to violence and the growing control of Salvadoran communities by gangs, like Marcos experienced.

In my last visit to El Salvador, I couldn’t help but think of Marcos.  I experienced first-hand the reality of life in impoverished neighborhoods where gangs rule.  I saw the fear of engaging in simple routines like travel to a neighboring community, where one can inadvertently cross from one gang’s territory into another’s.  I was surprised when friends chose to meet me for dinner at a restaurant rather than in their home, because “my neighborhood wouldn’t be safe for you.”  I secretly wondered if my presence would have put them more at risk for extortion if gang members knew they had an “American” friend.

One of the things that Marcos most wanted to do was to contact his mom in El Salvador.  He hadn’t spoken to her in years because he was ashamed of his life.  We called “to let her know I’m OK,” — even though Marcos knew he wasn’t OK.  “I know she loves me and prays for me.”  And Marcos wanted me to go with him to church.  As we worshipped, prayed, and talked about God’s grace and unconditional love, Marcos made peace with his life.  Soon, he was well enough to move on to his waiting job in New York.

Most immigrants I know have sacrificed much to come to the US: language, culture, family, social status, dignity.  When they talk with their families back home, few ever reveal the truth about how lonely or hard their lives are in the US.  And yet they still choose to be here, because for many, the worst life imaginable in the US is still better than what they faced in their home countries.